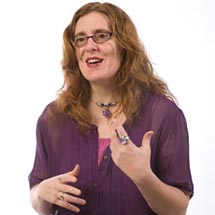 Celia Pearce is a game designer, author, researcher, teacher, curator and artist, specializing in multiplayer gaming and virtual worlds, independent, art, and alternative game genres, as well as games and gender. She began designing interactive attractions and exhibitions in 1983, and has held academic appointments since 1998.

Her game designs include the award-winning virtual reality attraction Virtual Adventures (for Iwerks and Evans & Sutherland) and the Purple Moon Friendship Adventure Cards for Girls. She received her Ph.D. in 2006 from SMARTLab Centre, then at Central Saint Martins College of Art and Design, University of the Arts London.

She is currently an Associate Professor of Game Design at Northeastern University. Previously she worked at Georgia Tech, where she directed the Experimental Game Lab and the Emergent Game Group. She is the author or co-author of numerous papers and book chapters, as well as The Interactive Book (Macmillan 1997) and Communities of Play: Emergent Cultures in Multiplayer Games and Virtual Worlds (MIT 2009), and Ethnography and Virtual Worlds: A Handbook of Method (Princeton 2012), along with Tom Boellstorff, Bonnie Nardi, and T.L. Taylor. She is also co-editor of the forthcoming volume Meet Me at the Fair: A World’s Fair Reader (CMU-ETC), along with Laura Hollengreen, Rebecca Rouse and Bobby Schweizer, due out in 2013. She has also curated new media, virtual reality, and game exhibitions, including XYZ: Alternative Voices in Game Design at the Museum of Design Atlanta, the first exhibition devoted to women’s contribution to game design, and is currently Festival Chair for IndieCade, an international independent games festival and showcase series. She is a co-founder of the Ludica women’s game collective.