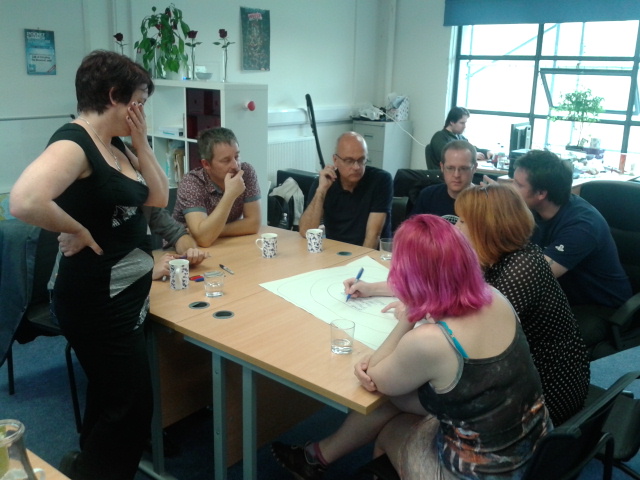 Notes on theme 1, ‘What is Colocation?’, from the World Cafe session led by Dan Ashton and Caroline Chapain: thanks Caroline for these notes!

Initial discussion started with traditional reasons about the theory of colocation in the literature. Economic activities tend to collocate because of economies of scale or agglomeration, or because they are part of large infrastructure type of industry (i.e. harbour). Given game developers can work with just a computer and a broadband connection, there was a feeling that maybe this does not apply to them as they can easily work at home (and many do). However, many participants felt that there were indeed various reasons why game developers would like to collocate.

First, renting a desk/space gives a feeling that what people do is real and that they are making a commitment to work in that sector; this was particularly the case at the Dutch Game Garden which works with students coming out of universities. In general, it was felt that collocating makes interactions much more effective and allow to save time (15%) as face-to-face contact are much more efficient. It takes more time to communicate remotely. In a space, people spend regular hours together so you don’t need to wait to chat like you do online. Chatting can be slow as well. In addition, colocation helps bringing people with different skills together and eases recruitment of freelancers and support working collaboration as you develop trust through social interactions. In addition, while a lot of information is available online, you can only see what people are ready to share or what you are looking for whereas in a common space you can also see the ‘invisible’ activities and stumble upon new ideas or unexpected information which can be useful. This is why when planning the space, it is important to plan for the unexpected favouring interactions. Being in a building, a room, a neighbourhood where you can feel people working in the same sector, buzzing and enjoying it, can also be supportive to your own work as you can embody that atmosphere. By being together, you can also build sustainability in the local indie game community by sharing and looking for projects and work – like a kind of ‘Hollywood model’. Some spaces also support the colocation of people with different skills and different sectors (i.e. universities/research) supporting sharing of knowledge between students, researchers and game developers.

Second, it was felt that people need social interactions, to be part of a community and develop identity (i.e. like in a game convention where you display that you are a fan) – you can get crazy staying in your own house! Being collocated is also helpful when you have a down day or if you need to ask questions, advices and as such helps with personal development. Given the nature of indie games, being together helps to develop a critical mass and a sense of identity. In Bristol and Leamington Spa, hubs have helped bringing together individual developers, some of whom may have work for larger companies previously but were scattered around. For example, in Bristol, they started with 13 people and are now 38. As a consequence, the hubs in Bristol and Leamington Spa have become central places to meet and be part of the indie game scene but also make it easier to invite professional speakers and organise events by offering a substantial audience. Apart from work, collocating also helps with the social life as people participate in informal social events (i.e. going to the pub…). However, co-location only may not be sufficient – some support through events and social activities are helpful in connecting people like game jams which are organised both by the Bristol Game Hub and the Dutch Game Garden.

Third, more widely, there were discussions about the location of game hubs in the city of Bristol or in Utretcht. The centrality of the place – being near cafes and in the cultural centre (the proximity of cultural activities or events like game jams) -was considered as very important. As such, some participants also felt that the aesthetic of the place, for example, being located in Stokes Croft in St Paul in Bristol, contributed to the colocation. In the case of Utrecht, the presence of the universities and their degree programme in game development has been an important role in the creation of the Dutch Game Garden.