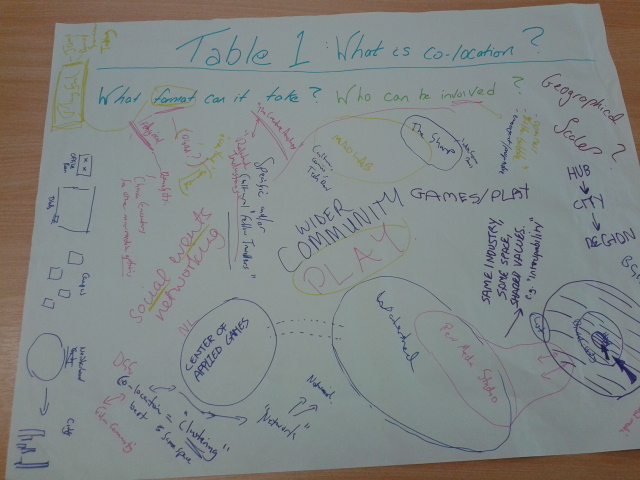 Notes on theme 1, ‘What is Colocation?’, from the World Cafe session led by Dan Ashton and Caroline Chapain:

What is colocation, what format can it take and who can be involved? were the questions explored at this ‘table’ of the workshop exercise. Of course some people arrived here after being at the other tables so the answers were built up from a mix of ‘blue sky’ thinking and reflections on the other topics (see other posts). There were two or three themes or spectrums that emerged in the dialogues responding to these questions.

1 Colocation = physical co-presence or not, and how does this relate to less physical or less permanent proximities? The consensus was co-location means regularly coming together physically in some shared enterprise. Digital ‘co-location’ might happen in different ways but this is not really the same and so the term makes more sense if it relates to this physical co-locating. But the relation to those not co-located then becomes a key question and task: what of those who are part of the shared enterprise but not situated in the same place, and part of a wider set of contacts maintained by those co-locating? It seemed important that they be included or at least invited regularly to come face to face with the co-located group.  So community contacts via social media, newsletters and so on and regular events and activities are an important part of the co-located group’s ongoing health and productivity. Also, this is key to how the group evolves, and finds new members, and existing members find new contacts and new places to go. the Bristol Games Hub, the Leamington Spa Creative Arches and the Dutch Game Garden were discussed for their ways of making this relation between the co-located and the wider circles of digitally connected and periodically present people .

2 Colocation with who ? For indie game developers is colocation really about being together with other indie game makers only or is it something which can happen or work well with other kinds of ‘creatives’? The Sharp in Manchester was mentioned as a space where game makers can be found co-located with other arts, film, cultural and digital producers. And in Bristol the Pervasive Media Studio brings people working on different digital, art and commercial enterprises together, within the Watershed centre. Game makers have and can be involved there also. In the Netherlands these 2 models are repeated in the differences between the Dutch Game Garden and the new, bigger budget Centre of Applied Games which has a wider range of ICT companies involved than the name suggests. So different groupings do occur. What is better? The discussion looked at pros and cons: diversity of interests is valuable for fostering contacts with the wider culture and building bridges of relevance and networking to institutional support that is not specific to the industry; indie game groups provide better shared resources and support for getting things done, play-testing, finding specific fixes or special help

3 The final theme was a bit more general and was really a discussion about the relation of a colocated group to different spaces they operate in: local, city and/or regional, national and international. The questions were about the rapport between physical locatedness and the wider networks sustained over different distances and scales via different digital media: phones, email, social media, etc. How wider communities/networks relate to the colocated seemed to emerge as a project the colocation should pay attention to in a more or less explicit manner as taking care of these relations is completely tied up with the success of the group and the people who belong to it. This is back to topic 1,  but the question here is also about how big and small the scale of the territory the group is co-located within.