Prof. dr. Joost Raessens holds the chair of Media Theory at Utrecht University. He has been Visiting Professor at the University of California, Los Angeles (2006) and Visiting Scholar at the University of California, Riverside (2004-2005). He is member of the Council for the Humanities (KNAW) and is on the editorial board of Games and Culture (SAGE). He was the conference chair of the first Digital Games Research Association (DiGRA) conference Level Up in Utrecht (2003).

Raessens’ current research concerns the ‘ludification of culture,’ focusing in particular on the playful construction of identities, on applied, serious and persuasive gaming, and on the notion of play as a conceptual framework for the analysis of media use. His inaugural lecture was published in 2012: Homo Ludens 2.0. The Ludic Turn in Media Theory (Utrecht University). He edited Homo Ludens 2.0: Playful Identities and Digital Media (AUP, in press), Digital Material. Tracing New Media in Everyday Life and Technology (AUP, 2009), Handbook of Computer Game Studies (The MIT Press, 2005, 2011), and Level Up. Digital Games Research Conference (Utrecht University, 2003). In 2001 he published his PhD thesisPhilosophy and Film (Budel: Damon). Raessens is the project leader of the research project Persuasive Gaming. From Theory-Based Design to Validation and Back (NWO, Creative Industries; 2013-2017), project coordinator of the Intensive Programme or Summerschool Identity and Interdisciplinarity in Games and Play Research (NUFFIC, Erasmus; 2014) and contact person (Humanities) of the Utrecht University Graduate Programme Game Research (NWO; a collaboration with Computer Science; since 2013). He participates in two research networks funded by the Arts and Humanities Research Council (UK): Creative Territories (led by Patrick Crogan, at the University West of England) and Games and Social Change (led by Scott Gaule, at Manchester Metropolitan University).He has been the supervisor of the research programmes Playful Identities (NWO; 2005-2010), Design Rules for Learning Through Simulated Worlds (GATE; 2007-2012) and Mobile Learning-Citizen Science (GATE; 2010-2012). Raessens is the scientific director of GAP: the Center for the Study of Digital Games and Play. 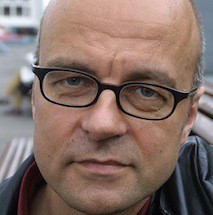